In a microgravity environment, drug-encapsulating particles that are very, very small—as much as 1,000 times smaller than nanoparticles—can be generated in high-yield processes. These particles are called picoparticles, and they promise to be effective delivery vehicles for drugs that need to be delivered to the brain.

In 2019, an experiment on the ISS was carried out to create picoparticles meant to encapsulate Alzheimer’s drugs. The experiment was organized by Aphios Corporation, Space Technology and Advanced Research Systems (STaARS), the Louisiana State University Health Science Center, and the Center for Advancement of Science in Space (CASIS). 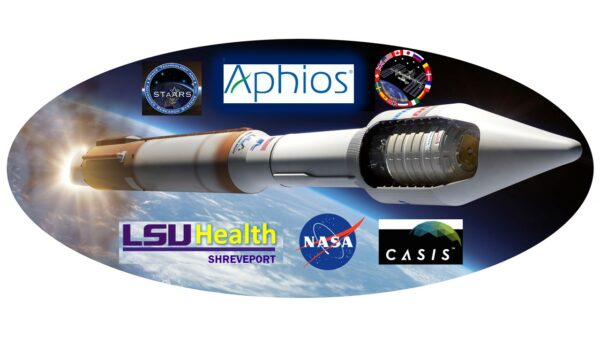 An experiment that ran aboard the International Space Station allowed Aphios to evaluate how microgravity could enhance nanoparticle performance. Nanoparticles called Bryosomes were added to the top layer of a frozen three-layered “ice-cream cake.” The middle layer contained cell culture media; the bottom, HEK-293e cells in a collagen gel. The ice-cream cake was thawed, mixed, refrozen, and returned to Earth. The Bryosomes were found to have become much smaller, enhancing their ability to carry drugs, such as Alzheimer’s drugs, into target cells.

“The production of picoparticles in a microgravity environment will establish novel manufacturing techniques for enhanced drug delivery systems,” said Trevor P. Castor, PhD, president and CEO, Aphios Corporation. “The novel targeted picoparticles produced during this experiment have the potential to improve the delivery of drugs that can arrest progression of or cure Alzheimer’s disease.”

An account of the ISS experiment was supplied to NASA by Craig Walton, the CEO of STaARS. In this account, Walton explains that Aphios’ SuperFluids CFN (Critical Fluid Nanosomes) technology was used to manufacture phospholipid nanosomes (which Aphios calls Bryosomes) and encapsulate an Alzheimer’s drug candidate that is being developed by Aphios. According to Aphios, the drug candidate (Bryostatin-1) is neuroprotective by α-secretase activation via novel protein kinase C isoforms, downregulation of proinflammatory and angiogenic processes, and the substitution of β-amyloid for its soluble and harmless relative, s-APPα.

“The nanosomes are characterized in terms of physical size, chemical content, stability, and biological activity in terms of α-secretase production in neuroblastoma (SH-SY5Y) and human embryonic kidney (HEK-293e) cells,” Walton indicated. “These nanoparticles are then frozen at −80°C.

“Frozen CFNs are then transferred to the ISS, thawed, reconstituted, and refrozen to −96°C after specific time intervals at 37°C. After returning to Earth and thawing at room temperature (25°C), CFNs are characterized in terms of physical size, chemical content, stability, and biological activity in terms of α-secretase production in neuroblastoma (SH-SY5Y) and human embryonic kidney (HEK-293e) cells.”

The average size of the nanoparticles decreased from 88–89 nm to less than 3 nm. In addition, the nanoparticles proved to be more effective. Walton noted, “The size reduction of nanoparticles created in microgravity vastly increases surface area for uptake and delivery, reducing the required dose per treatment and increasing production value by decreasing cost per dose.”

“We want to confirm these studies and eventually manufacture the nanoparticles in a space environment or on the moon,” Castor declared. “More effective products can help humans on Earth with the aging process as well as astronauts and other space travelers.”

To read the rest of this article :