Since the start of the HIV/AIDS pandemic in 1982, over 32 million people have died from AIDS and there were approximately 37.9 million people living with HIV in 2018. In the United States, an estimated 1.1 million people are currently living with HIV and approximately 40,000 new infections occur each year. AIDS-related mortality has fortunately declined by 33% since 2010. Even with these encouraging statistics, the total number of persons infected increases about 1 million per year in the absence of a cure since the annual average rate of new infections is approx. 1.7 million and the average number of deaths globally is approx. 770,000. A cure for HIV is urgently needed to bend the curve towards ending this pandemic affecting more than 38 million people worldwide.

HIV infects several cell types during the course of infection and progression to AIDS. Antiretroviral (ART) is very effective in controlling replication of the virus in most cells. HIV, however, establishes latent long-term infection in a small pool of memory CD4+ T (immune) and other cells, which contain integrated but transcriptionally silent HIV provirus. These cellular virus reservoirs are a potential source of rapid HIV virus reactivation and progression to AIDS if ART is stopped for any reason. There are no commercially available drugs for treating HIV latency and/or curing HIV. 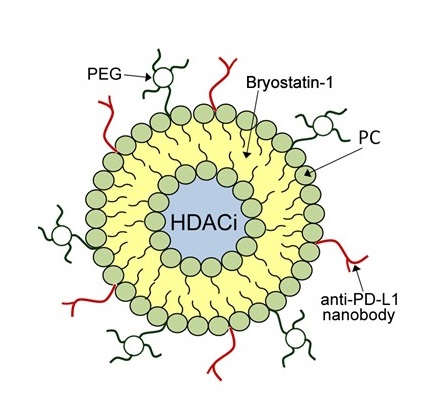 The Aphios ’030 patent is for a combination of two Latency Reversal Agents (LRAs) — a Protein Kinase C (PKC) modulator of the anti-tumor class, ‘Bryoids’ and a Histone Deacetylase (HDAC) inhibitor co-encapsulated in long-circulating pegylated immuno-nanosomes to purge latent HIV from cellular reservoirs. Bryoids, such as Bryostatin-1, activate cellular transcription factors such as NF-κB which transcribes latent HIV into active HIV virus. The HDAC inhibitor removes acetyl groups affecting gene expression and increases accessibility of NF-κB improving transcription efficacy. By combining a PKC modulator and HDAC inhibitor in the same nanoparticle, both drugs reach their intended target simultaneously. These nanoparticles can be coated with targeting ligands to reach their target and with anti-PDL-1 nanobodies to keep CD4+ T-cells activated for clearance of re-activated HIV-1 virus. These immuno-nanosomes will reduce systemic toxicities while pegylation increases nanoparticle biological residence time to increase therapeutic efficacy and overall therapeutic index.

Dr. Trevor P, Castor, CEO, Aphios and inventor of the issued patent states that “HIV/AIDS is a pandemic we are still battling on par with pandemics of the past such as the 14th century Bubonic Plague and the 20th century Spanish Flu. The end can sometimes seem to be a long way away, but a cure for HIV is realizable within our lifetime. APH-0812 is designed to activate latent HIV reservoirs for clearance by ARVs and/or the patient’s immune system, and eliminate the long-term economic burden of ARV drug costs, associated drug-induced side effects and social stigma.”

Aphios (www.aphios.com) is an emerging growth biotechnology company developing green enabling technology platforms to improve drug discovery, manufacturing, nanotechnology drug delivery and pathogenic safety and, based on these platforms, enhanced therapeutics to improve quality-of-life and treat chronic diseases such as prostate and pancreatic cancers, infectious diseases such as HIV/AIDS, and Central Nervous System disorders such as Alzheimer’s disease, Multiple Sclerosis and Opioid Addiction in an environmentally sustainable manner.